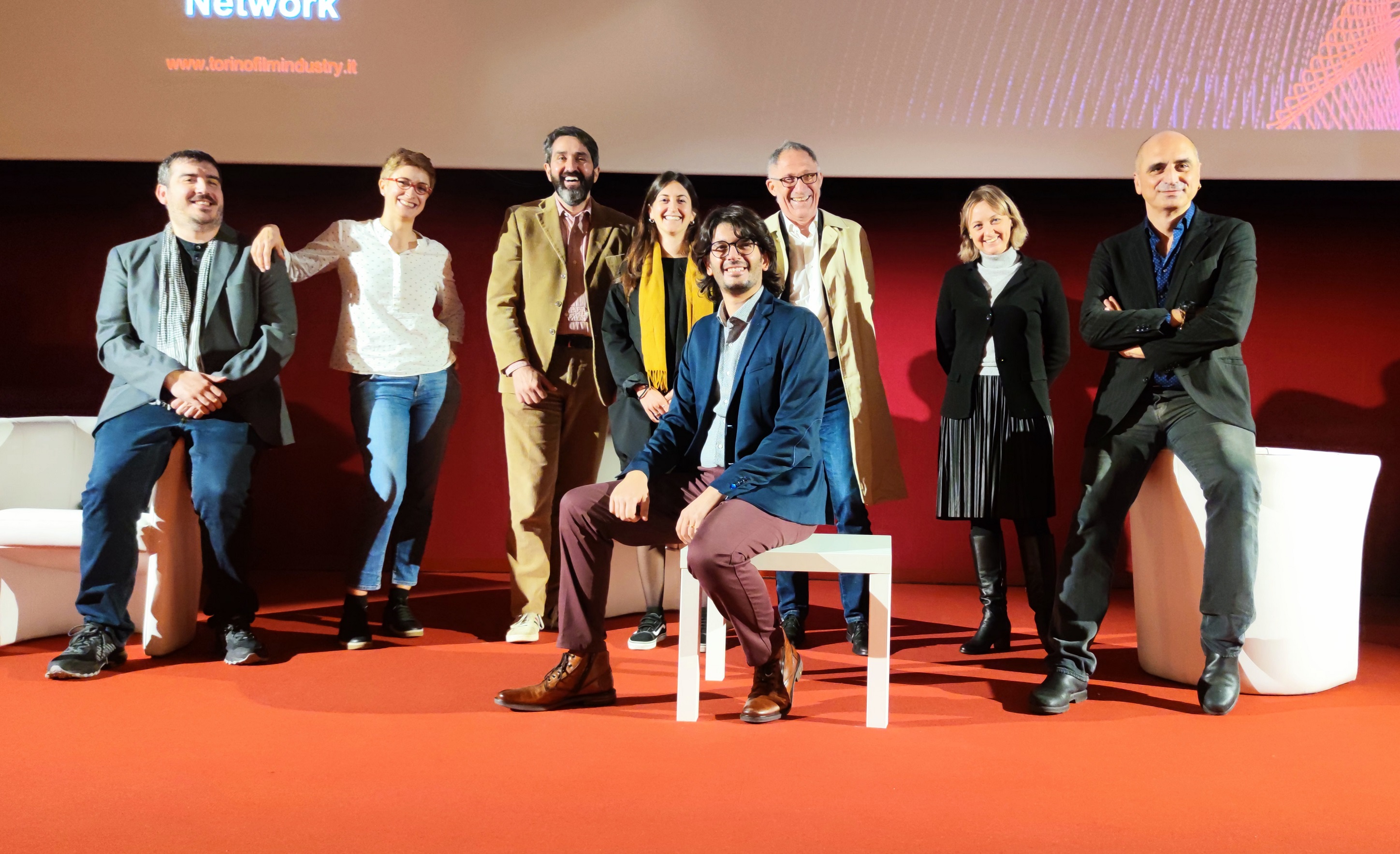 An event not to be missed for the whole audiovisual industry: it's the TFI Torino Film Industry, which will take place from November 26 to December 4, during the Torino Film Festival (but it will also be online from December 6 to 10). Reaching its fourth edition, it has become an essential reference point for all main players with its meetings, market, and platform for international co-production that focuses on the new talents and new trends of audiovisual industry and cinema.

Accreditations open until the 15th of November.

(It is preferable to use the Google Chrome browser)

Meeting, market, and platform for international co-production that focuses on the new talents and new trends of cinema and audiovisual industry, TFI Torino Film Industry once again takes place simultaneously with the Torino Film Festival, proving itself to be the work & business core of the historic city cinematic event. This double fourth edition – that is once again made possible by the support of Fondazione Compagnia di San Paolo – will take place live from November 26 to December 4 and, as the past digital edition was met by excellent feedback, it was decided to also offer a specific online schedule from December 6 to December 10.

This edition will once again highlight the collaboration and synergy between the institutions of the Piedmontese cinematic system – before all, the Museo Nazionale del Cinema and the Torino Film Festival – and tangibly show the strong identity of local cinema and its prosperity, both artistically and industrially speaking. The nine-day-long program will disclose a schedule of events tied to independent cinema that aims to portray the whole audiovisual industry, touching upon every phase and player that composes it.

TFI Torino Film Industry is a Film Commission Torino Piemonte project that includes and networks the Production Days organized by FCTP itself, the TFL Meeting Event organized by National Museum of Cinema’s TorinoFilmLab, and the 6th edition of the Torino Short Film Market organized by the Centro Nazionale del Cortometraggio. It offers events of international relevance dedicated to professionals of the audiovisual industry, with special attention for new talents and new cinema, short films, documentaries, debut and second works, and the most original TV shows, with pitches, panels, and workshops that will be offered to the reference target.

"It is with great pleasure that the Fondazione San Paolo renews its support to Torino Film Industry" - Francesca Gambetta has declared, Manager of the "Creare Attrattività" mission of Fondazione Compagnia di San Paolo's Obiettivo Cultura. "Turin boasts a centenary tradition of cinema and cinematic culture, as well as a solid ten-year experience in the production chain tied to the audiovisual industry. In the subject matter of the "Creare Attrattività" Mission, the Fondazione Compagnia di San Paolo supports the Torino Film Industry, convinced of the importance of this initiative that promotes institutions such as the TorinoFilmLab and the Torino Short Film Market, and in particular, the role that Film Commission Torino Piemonte fulfills as an essential player in the cinema industry, as a nodal institution of the system, active in several branches with its support to production, distribution, and promotion of audiovisual products, fundamental subject for the creation of network and system actions to expand and reach a national level for the activity and the image of Turin as the City of Cinema, in a prospect of appeal and development."

"We are very proud to host within the Production Days organized by FCTP the ribbon-cutting ceremony of the 4^ edition of TFI Torino Film Industry, which will open on the 26th of November with many confirmations and important news."

This is how Paolo Manera, director of Film Commission Torino Piemonte, comments on the forthcoming inauguration of the festival. "An initiative that we strongly wanted since from the beginning and that we see growing each year: starting from the locations - that will this year include as a protagonist the Museo Nationale del Risorgimento in Turin, which will join the historical areas of the Circolo dei Lettori in Turin, used for the event ever since the first edition - up to the always growing number of partners that collaborate to the schedule: starting from Doc/It Associazione Documentaristi Italiani – which has for the past two years organized Italian Doc Screenings Academy in the TFI environment, joined this year by the eminent forum of IDS Industry – along with Sotto18, Cartoon Italia and Asifa which will give life to a new focus on animation, and CNA Cinema and Audiovisivo Piemonte, which will contribute to the Production Days in a structured way for the first time - as a partner and sponsor - to strengthen the presence of the industry in the whole branch."

From November 29 to December 1 the TorinoFilmLab gathers all its annual activities in Turin, with the TFL Meeting Event 2021: a showcase of projects, films, and talents developed in TFL and a market of international co-productions. In the schedule, pitching sessions and one-to-one meetings, networking events, and an award ceremony focused on 30 feature film projects in different stages of production, developed by 50 professionals of global cinema thanks to the FeatureLab and ScriptLab programs; furthermore, a selection of films labeled by TFL that are ready to make a debut in the chain of international festivals presented during the TFL Coming Soon.

Additionally, the TFL puts its expertise to the service of professionals of the Italian cinematic branch, but the regional one as well with its initiatives Up & Coming Italia and Alpi Film Lab: "The big news of this year is Alpi Film Lab" highlights Mercedes Fernandez, director of TorinoFilmLab "a program that offers a formation itinerary on Italian-French co-production, working with filmmakers of cross-border regions. Alpi Film Lab replies to the strategy that the TFL develops to bring international professionals on the Piedmontese territory, and it completes the already existing TFL program Up&Coming, oriented towards Italian producers interested in working with international partners." TFI Production Days will host in its program the final phases of these itineraries, on Monday, November 29, with the presentation of the 8 film projects that participated to Alpi Film Lab and the 4 films proposed by rising Italian producers that have been selected to take part in Up&Coming Italia.

The TFL Meeting Event will go on from December 6 to 10, with an online program that completes TFL's proposals, enriched by discussion panels, interviews, and insights that will show other facets of the activities and the community of international professionals who grew thanks to TorinoFilmLab.

"The Torino Short Film Market is born in 2016 as an international market focused primarily on the short film ecosystem. Its aim, today, is both to improve the impact of short films and their related business in the context of the cinematic industry and to promote the development of new authors and cinematic talents. TSFM vol.6 will be a hybrid event" Enrico Vannucci comments, artistic director of the festival.

"The Torino Short Film Festival will take place live in Turin from December 1 to 3, in various Turin locations: the Museo del Risorgimento, Circolo dei Lettori, Palazzo Cisterna, and Museo del Cinema, and online from November 29 to December 10." - reminds Eugenie Botterau, TSFM managing director - "Access to the event, both live and online, requires an accreditation application within the 15th of November, and it will be restricted to audiovisual and cinema professionals only."

A program packed with activities that Film Commission Torino Piemonte, TorinoFilmLab, and Torino Short Film Market offer to their target audience with specific access and accreditation methods for each partner and that simultaneously puts forward common and across-the-board initiatives in both live and online events.

The online program – that will take place at the end of the live event – will allow all accredited guests on-demand access to a selection of the program (to retrieve or review some of the live content), and it will also allow using the platform to organize one-to-one meetings with the whole network of TFI Torino Film Industry accredited guests (which consists of the FCTP Production Days accredited guests, along with the TorinoFilmLab and the Torino Short Film Market network).