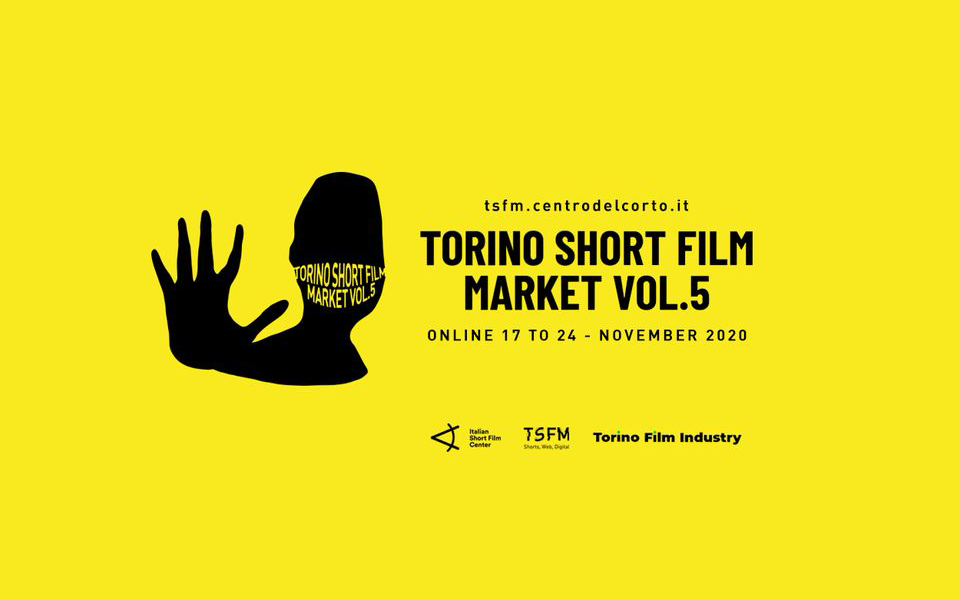 The fifth edition of Torino Short Film Market - the only event dedicated to short films, along with Clermont-Ferrand International Short Film Festival, to have won the 2020 Creative Europe - MEDIA "Access to Markets" call - will take place November 17-24. TSFM, which this year is scheduled to take place in a brand new virtual version, represents a must-attend opportunity for those who have made or wish to make a short film to find a co-producer, a distributor or a buyer and is organised by the Centro Nazionale del Cortometraggio within the framework of the third edition of Torino Film Industry, a project by Film Commission Torino Piemonte.
On the 2020 call closing date, 90 projects were received from over 30 countries including Great Britain, Germany, Spain, Belarus, USA, Argentina, Israel, Iran, South Korea and Australia.

TSFM 2020 - The sections
Short Comedies is a pitching session for international short comedy projects. 5' to present the project. The pitching session will be folloed by the meetings with the decision makers.
VR Stories is an international co-production pitch session for virtual reality narrative content. Story telling is the focus of VR Stories and selected creators or producers will have 5' to present their projects.
Distributors Meet Buyers is a pitching session for Distribution Companies representatives. The selected participants will have 5' to present their Distribution Catalogue.
Oltrecorto is a pitching session for directors and/or scriptwriters. The selected participants will have 5' to present their Feature Film or TV Series project based on a previously completed short film.
Pitch Your Fest! is a pitching session for Festival organizers scheduling short films in their lineup. The selected participants will have 5' to present their Festival event.
Short Films. Call for films up to 30' made in 2019 and 2020. Screenings (during TSFM) and Video Library (access guaranteed until June 1, 2021) are private and do not affect the premiere status of the works.
This edition also includes some important new features.
A full immersion workshop on short films creation and development, held by Massimiliano Nardulli and Massimo D’Orzi. Open to all aspiring directors and/or screenwriters  currently working on a short film project in its early stages of development, it aims to provide participants with both basic knowledge and working tools conducive to writing a screenplay and making a short film, and the opportunity to increase their short film story development skills, as well as their knowledge of  the wolds of production, distribution and festivals.
Collaboration with the Sonego Prize, a short film scripts contest. Developed at Lago Film Fest, it expanded thanks to the support of the Scuola Holden. Its aim is to remember and celebrate the work of one of the fathers of the Italian comedy and it takes the form of a three-stage training course in which the young authors of the best screenplays have the opportunity to grow and interact with each other. The final phase will take place at the Torino Short Film Market.
Finalists will pitch their stories to find international co-productions.  Torino Short Film Market will also host the final event of the Premio Rodolfo Sonego 2020, the awarding ceremony where the winner of this edition will be announced.
Finally, the screening evening events dedicated to ALL YOU NEED IS SHORT, curated by Enrico Vannucci and Massimiliano Nardulli, and SEE YOU SOUND, curated by SYS, will also be available online.

TFI Torino Film Industry is a Project by Film Commission Torino Piemonte – networking Torino Short Film Market full calendar, as well as an event section by TorinoFilmLab and the Production Days. It is held in collaboration with Torino Film Festival and promoted by Museo Nazionale del Cinema, Regione Piemonte and Città di Torino with the support of Compagnia di San Paolo.